Real Time-Attack (often abbreviated as "RTA") is a type of speedrun where completion of a game is timed in real time. Goldeneye has five main categories for RTA speedruns which are ranked on The-Elite.

The rankings for Goldeneye RTA speedruns can be found here: https://rankings.the-elite.net/goldeneye/single-segments

RTA speedruns are often timed through a splitter program, such as LiveSplit or WSplit. These programs are useful for gauging your pace throughout a longer speedrun, telling you if you are ahead of your current PB at any given time, and other info such as your best possible time based on your current best splits. Setup of these programs is fairly easy, requiring simple installation and downloading splits from your game of choice. You also have the choice to set up your own splits. Using these splitter programs is not required for RTA speedruns, as runs get retimed afterwards, but is still reccomended as a personal tool.

The term "Any%" is the category in speedruns where you beat a game as fast as possible with no other restrictions. What constitutes "beating" a game is different for each speedgame, although most classify it as reaching the credits screen of the game. This is the case for Goldeneye any%. The fastest way to reach the credits In Goldeneye is to simply beat the game on Agent difficulty.

Runs in this category must start timing at the selection screen on Dam Agent. The runner must play every level on agent to progress through the game until Cradle, when timing of the run ends as the level fades out. After this, the credits screen is unlocked. The runner does not need to play Aztec or Egypt, as these levels are not unlocked by beating the game on Agent from a fresh file.

Strategies used in RTA are much similar to Individual Level (IL) speedruns for the most part, although generally taken much safer. The biggest differences from IL speedruns are the levels Frigate and Statue. On Frigate, you must free two hostages, and wait for them to escape before completing the level. This is very RNG-dependent, and runners may sometimes have to wait 20 or 30 seconds at the boat for hostages to escape, as opposed to IL runs where the runner can play the stage over and over until the hostages escape fast enough. On Statue, the big caveat is the Flight Recorder (FR) spawn, which can spawn in 9 different locations. The runner may have check all 9 locations in an RTA speedruns, whereas in IL speedruns, the runner can simply hope that the FR spawns in the closest spot to the ending gate.

The current tutorial made by Goose, although outdated, still has good general information on Any% speedruns. A new tutorial has been rumored to be in production by JD, so be on the lookout for that

In this category, the goal is to beat the game on Secret Agent difficulty. Runners must start timing at the selection screen on Dam Secret Agent, and play every level on Secret Agent to progress through the game. After completing Cradle on this difficulty, Aztec is unlocked, so runners must also beat Aztec Secret Agent as part of this speedrun. Timing ends as soon as the level fades out.

Strategies in RTA runs vary more drastically from IL speedruns than its Any% counterpart. This is due in part to guards having extra health and accuracy, as well as added objectives on many levels that make good runs harder to come by. Facility, for example, has 7 different locations for Doak to spawn. In IL runs runners would only check the best possible spawn location, but in RTA runners will often check 5 possible locations, or 3 locations in the labs area, leading to several resets when he's not there. There's also the Surface 2 "Finnish Window" strategy, where instead of grabbing the tower key from a guard, the runner aims through a window of the tower into the unloaded Comms link room, shooting the table and destroying the Comms. This saves about 20 seconds, however it is a 1 in 3 chance that the Comms will actually complete. Thus this leads to a lot of resets, and this strat is only really used for WR level speedruns.

This category is one of the lesser played speedruns in Goldeneye, as it's not as competitive as an Any% run, and not as challenging as a 00 Agent or 100% speedrun. Thus, there are currently no tutorials for Secret Agent RTA at the moment.

In this category, the runner must complete all 20 levels on the 00 Agent difficulty. The timing starts at the selection screen on Dam 00 Agent, progressing through the levels in order, and ends on Egypt when the level fades out. In addition, completing all 20 levels on 00 Agent unlocks 007 mode.

Strategies in RTA runs are, for the most part, very safe compared to IL speedruns. The guard accuracy is high and every hit does a full bar of damage. A lot of strategies involve going out of the way for body armor, which makes the Japanese version of the game highly advantaged for this category, as there are several more body armors present. This is especially advantaged on levels like Silo, Jungle, Control, Caverns, and Aztec, where there are guards at every turn. The biggest caveat for this run is unfortunately near the very end, with Caverns. Even with two extra sets of body armor, survival is not guaranteed. There is also a very high possibility that 3 out of the 5 scientists will die from rouge explosions, which fails the mission. And there is also the chance that the Radio to Jack Wade, which must be activated, will be destroyed before you're able to activate it. It's a common and unfortunate run killer near the end of the run. Overall, the 2nd half of the game is extremely difficult on 00 Agent, and doing all of these levels back to back with no fails is extremely rare.

Because of this difficulty though, this category is the second most popular only to Any%. Alex Anderson has a series of tutorials for RTA strategies on each level. While these tutorials are older, the strategies are generally unchanged since then, and provide a good insight into survival on the harder stages.

The term 100% in speedruns refers to beating the game while also accomplishing side goals which are specific to the game being played. This can involve playing the game on a higher difficulty, beating every enemy boss, collecting in game items, and so on. In Goldeneye 100%, the runner must complete all 20 levels on the 00 Agent difficulty, and unlock all the cheats, which are accessible from the game menu. Because this speedrun involves the previous category, 100% runs are usually done in conjunction with 00 Agent speedruns. 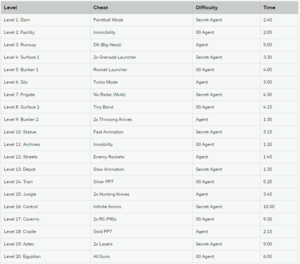 Cheat target times for completion of 100%

All 20 levels in Goldeneye have one unlockable cheat each, alternating between the 3 difficulties for each level. To the left is a list of all cheats and the target times to get them. Practiced speedrunners shouldn't have an issue with meeting the goal times for these cheats, even the notorious "Invincibility" and "Invisibility" cheats.

Unlike the natural gameplay progression requirement in the other categories, in 100%, after completing 00 Agent, the rest of the cheats do not need to be collected in a specific order. Runners have invented different ways to go about these cheats, although the main recommendation is to play Dam Secret Agent last. This is because there is a long cutscene of Bond jumping off the dam. Since timing ends on the fadeout of any level, this avoids having to include this ending cutscene in your time.

In this category, runners must complete all 20 levels each on all 3 difficulties. There is no required order that the levels must be played in. For example, the runner could play every level on 00 Agent, then Secret Agent, then Agent, or they could choose to play all 3 difficulties of one level before progressing to the next level. As long as all 60 levels are completed, the speedrun counts.

This is the least played RTA category in Goldeneye, mainly because it's a long speedrun and very tedious.