A projectile is something that can be thrown in GoldenEye 007.

Unloaded mines can warp objects such as the glass or boxes, though not commonly.

Unloaded mines do not collide with walls, ceilings or seemingly doors at all.

If you manage to unload (more on that below) a mine, it will always follow the same pattern of motion: 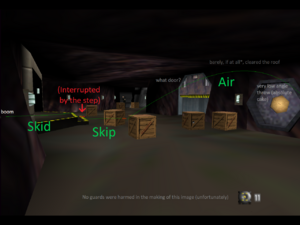 Example of Caverns SA mine throw

No units for simplicity! Throw speed is 16.6666.. .. but it also gets an upward motion of 5 added (as vectors) for free. This is why if you throw directly forward, the mine rises slightly initially. Very kind of Rare really, since this essentially gives us more than 0.5s extra in the air for free.

With a bit of SUVAT we can expect the mine to skip to a height of ~9 (gravity is -0.27777777). It may exceed this a little due to lag, but it's worth bearing in mind that Bond's diameter is 60, so this is miserable. The step in Caverns is height 22.4, and the dais is a further 26.1 above that. If it the mine skips into either of these, then the mine 'warps' up to the step / dais and begins skidding 'early'.

If it means anything, it turns out unloading collisions for a projectile are seemingly completely independent of unloading guards. The broad idea is throw and quickly look away / down.. but what happens?

As is generally known there are portals between sections of the game. If you look away so that these are no longer 'visible' or in-view (imagining that they weren't invisible), the collisions for the walls and ceiling of that part seem to instantly be removed. Moreover, collisions with objects change. The mine seems to no longer check if it has passed through an object, but just whether where it wants to go to will have a collision. This makes it quite easy to 'warp' through thin objects.. such as a pane of glass. It can (less commonly) even pass through all of the boxes. Just 'warping' into a box is reasonably common.

Then it gets even weirder, as once a mine has left through the ceiling it seems to get somewhat 'forgotten'. (Picture's *) In fact the corridor on Caverns has arches which stick from the walls and ceiling: I think if the mine passes through these unloaded then it also gets forgotten, but I'm not sure. The mine can then fall back down and pass clean through the door at the end of the corridor on Caverns every time (you can even watch it do so yourself). This is very reminiscent of the train shot in depot, where the bullet can pass through the wall (or even of a certain s1 strat)