Depot (Part iv of Mission 6: St. Petersburg) is the thirteenth level in Goldeneye 007.

There are 7 spawn guards in total[1]. Initially, they all wait 20 seconds, starting when the first cinema appears. After 20 seconds have passed, the game checks if Bond is within a "safe area" (see below), if so, the game just waits for Bond to leave that area. Once Bond has touched a non-safe area, the guard's timers are reset and the game now waits X seconds, the value of X being individually set for each guard (see below). Once this timer runs out, the game checks if the guard is dead, and if so, he spawns. Otherwise the game goes back to check if Bond is within a safe area again. Where he will spawn depends on which out of 10 "special areas" Bond last was in (see below). Once a guard has spawned, the script returns to checking if Bond is in a safe area (so the initial 20 seconds only happen the first time around). This whole process is easier visualized through 5 steps:

The weapons/health/armor for the spawned guards are random according to these probabilities:

The individual timers for each guard are the following: 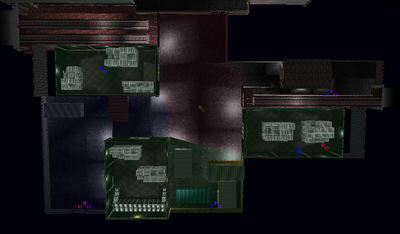 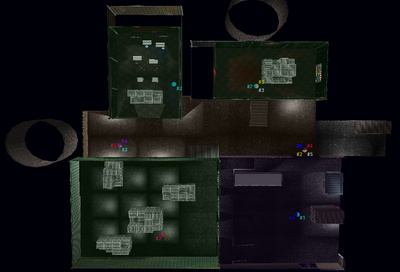 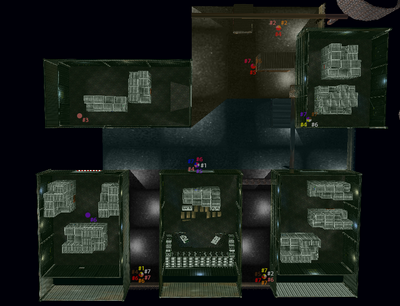 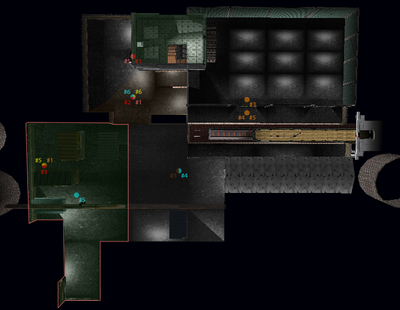 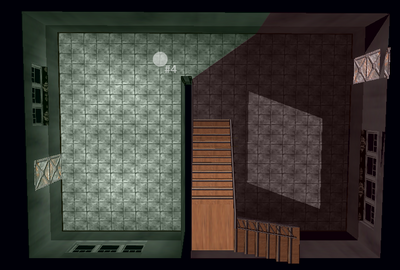 Note that special area #8 is also a safe area, hence the outlining of pink rather than a highlight. If Bond is within a non-highlighted area, that means guards will spawn according to the last special area Bond was in.

So if Bond stands in the very beginning (the blue highlighted area) for 40 seconds (20 + 20) then the first guard will spawn at the blue dot with a blue "#1" next to it. If he instead ran quickly to a green area before the first 20 seconds had passed, no guards will spawns until Bond has left that area.

The game doesn't always recognize that Bond entered the pink area (most likely because it's also a safe area, and script wise, that usually takes priority). So the game often uses white spawns instead.

There's a line of code that's very useful to us[2].

Long story short: 1. After a guard spawns, he will run/jog until he's within a certain distance of Bond. 2. If Bond is within a safe area, the script will jump into a second script, that tells the guard to jog until he's even closer to Bond. 3. Once he's done jogging, a third script is entered. This is the one where the guard starts kneeling, which should be very familiar.

The interresting part is that there's only 2 ways the guard can get out of the third script (where he is unable to move anywhere), either the guard notices that Bond fired a bullet, or Bond is more than 500 units of distance away. 500 units is quite alot, if you draw a circle with 500 units as a radius, it will cover most of the level. So in Illu's run, the guards were positioned in the large warehouse, and the 500 unit radius easily covers the mainframe room from there, which prevents the guards from following him.

If you wait even longer, until all 7 guards have reached this area, you might be able to avoid killing any guards when leaving the mainframe area.