Surface 1 (Part i of Mission 2: Servernaya) is the fourth level in Goldeneye 007.

Bond must activate the console the satellite dish building.

Completed when you reach the ending.

The safe key is located in the first building on the left outside the spawn area. The door is locked by the large key, which is held by the 'brown guard' in the grenade launcher hut.

The building plans are located in the safe in a building inside the compound. The door to the building itself is also locked by the large key.

In 007 mode, the only requirement is that the player is no longer watching either of the opening cinemas, and 2 seconds have passed since the level loaded.[1]

On SA / 00A, the player must also enter one of two rooms before spawning will start[2]: 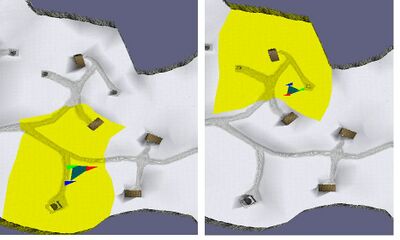 On agent the brown large key guard must finish fading out and then the player must be in one of the two rooms.

There are 4 spawn guards in total, and their spawn times are based on the following logic, which is run independently for each of the guards[3][4]:

Every 2 seconds, the logic decides whether to (re)spawn the guard. If the guard is still in the level (including if he is doing a death animation), then he will not be respawned.

Otherwise the odds of the guard spawning on each 2 second cycle depends entirely on what gun Bond currently has equipped:

If a spawning guard is within 100m of you, he'll always have a Klobb. Otherwise he has an 21.5% to have a klobb, and will otherwise have a sniper rifle[5].

Spawn guards delete themselves if they're 300m units or more away from you, but this is too great a distance to ever be relevant. [6][7]

So now we know when they spawn, but not where. All levels in Goldeneye are divided into rooms/areas, and in the case of Surface 1, entering certain rooms changes the guards' spawn locations. The map below shows the rooms with color highlights, as well as red circles indicating spawn locations, and colored numbers (corresponding to the room colors) between 1-4 so signify which of the four guards that can spawn in that location. Non-highlighted areas simply use the previously entered room's spawn locations. 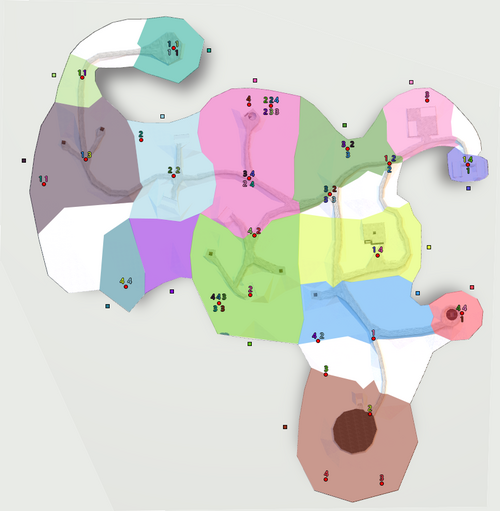 As described above, on agent the brown guard must be killed to trigger the spawning. This actually may not be too infeasible with some far-comms style shots through the back window of the hut, but the real issue is that the guard must have faded out before you can exit the trigger room. This would be the bottleneck and would presumably lose more than the grenade would save. That said it's not been carefully looked at.

Shooting locks through trees / from distance

This is used in TAS runs. For example, shooting locks through trees, and shooting a lock after exiting the tree line. However, this is not recommended for human runs. Looking up will probably cost some frames. Shooting will generate a small amount of lag with very little chance of success. On competitively paced runs, the lock sequence takes ~ 3 seconds, and trying to deviate from rote memory -- by one or at most two bullets -- in one in 100? runs -- will probably be detrimental toward a completion. Historical note: shooting through trees has been done on runs[8] (video), but is not recommended now.