Egypt (Part i of Mission 9: el-Saghira) is the twentieth and final level in Goldeneye 007. The level is the same across the standard difficulties, except that the later Barons require different body part hits to die to one bullet. The level is bottlenecked by the 1st and 3rd Baron's Death Animations.

From the Golden gun room, see below.

Each of the 3 incarnations of the Baron must be killed, with his health increasing each time.

After each spawn, the Baron constantly faces Bond, much like Valentin/Miskin does.

The 2nd Baron spawns facing in the opposite direction of where Bond usually is on wr runs, so he needs to walk around in a half-circle to face Bond. By being to the right of him when he spawns, he will turn to the right since that's the shorter angle to turn through.

Note that the Baron will just spin instantly without walking if he is unloaded, so you must also be looking towards that area when the 2nd Baron spawns. The 3rd Baron will always be unloaded unless you get a bad 2nd Baron death animation, and so this only applies to Baron #2. 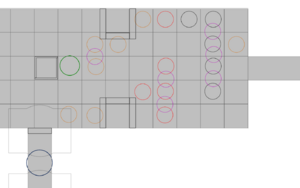 All the trigger circles in the room. Note that only one colour is active on any one frame!

Retrieving the Golden Gun requires navigating a floor maze[2], though this has been slightly sidestepped by a consistent tile warp.

The triggers in the GG room are spheres, centred on points on the floor. When Bond is moving at speed he dips slightly, and so the circles that he can't enter are slightly larger. These are shown in the diagrams on the right.

Naively, stepping inside any of the circles except the green one triggers the drone guns and you've failed the room. Stepping in the green one opens the glass container and you've succeeded. They have clearly been laid out with the intention of leaving a path of square tiles for the player to find.

However the spheres are actually in 4 groups which are coloured Black, Red, Orange and Purple on the right. Each is only active for 1 in 4 frames - they cycle in that order.

On top of this, the cycling doesn't start until you clear the end of the entrance corridor into the room proper. This coupled with a stable 30hz framerate on NTSC creates the perfect environment to set up a consistent warp.

If you fail the room, you don't have to redo it from entrance. Instead, nip out into the big room with the 1st Baron, then quickly walk back again (don't fall down), duck, and re-enter the GG room by walking under the closing inner door. Then you can easily enter the Green circle to open the glass box.

The consistent tile warp was revealed in TASpap, and involves taking an indirect line from the end of the entrance corridor up to the 1st 'wall' of triggers. This is pictured on the right, with Bond in green.

This line wastes about 1 frame (1/30th of a second) in order to be just outside of the purple circle when it is active. Then you have 4 frames to clear the circle before it activates again. The lag spike from switching weapons makes one of these 4 frames much longer, making it far easier to clear the circle, though it can technically be done without.

The other secret is to turn left (around the black circle), since this gives you shorter route out of the purple circle and puts you on a better line when you leave.

The line after this first tile warp is pretty direct to the trigger circle, but hypothetically you could warp the 3rd 'wall' right before the Green success trigger, as Icy does in his Egypt Agent 0:41 TAS. On emulator the framerate fluctuates between 60 and 30fps, and the lag from weapon switches is far greater so the tile warps become a lot easier.

It's unknown which cycle the room will be on when a player reaches the 3rd 'wall' on console, but a warp through the left-most orange circle could be viable. That said the timesave would be minimal, since the line around the left of the 3rd 'wall' is still pretty direct and sets up the turn around the ammo & gun.