Facility (Part ii of Mission 1: Arkangelsk) is the second level in GoldenEye 007.

Enter the room with the stairs up. This is the only route to the ending so the objective is trivial.

Completes a fixed time after Trev first greets Bond with "Glad you could make it, 007". This is the bottleneck in the ending, and so this objective should be completed deep into the fade.

At most 2 scientists (excluding Doak) can be killed.[1] This largely isn't a problem though you can fail it with a poorly placed mine boost upstairs.

The only additional objective on SA / 00A. This requires meeting up with the man himself, Dr Doak, and receiving the door decoder from him[2].

Facility can experience the Time Not Saved glitch.

Doak does not spawn until you enter the bathroom. There are 7 locations he can spawn at[3], as pictured: 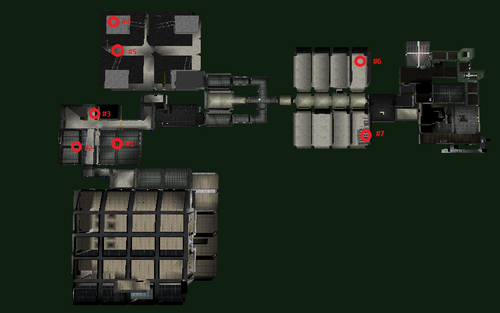 The 3 better spots have common names, since all are involved in alternate strats:

The game checks if Bond is within Doak's line of sight, and if so triggers Doak's walking toward Bond[2]. The conversation is triggered once Bond is within a 2m, and 5 seconds later Doak will give Bond the door decoder, wherever Bond is in the level.

In particular you can 'meet up through the glass' when Doak is in the small lab. This still loses at least 0.30s compared to the best spot even in a TAS setting[4], and would lose even more when compared to 'right strafe Doak'.

This refers to the position of Trevelyan when Bond enters the bottling area.

The script for each of the trio of guards in the hallway after the console controller door is naively written to wait until they see Bond, then walk & shoot, followed by run & shoot, before becoming normal guards. However if you look down heavily then the two charging animations fail and they will fall through to become normal guards.

This is a theoretical strategy that lures one of the guards next to the decoder door to open it for you, saving 2-3 seconds. This has only been demonstrated in a TAS. More information in this post.

There's a separate page discussing the technical aspect of the decoder door one guard lure.