Streets (Part iii of Mission 6: St. Petersburg) is the twelfth level in Goldeneye 007. This level features a countdown timer; all objectives must be cleared and the end of the level reached before the timer elapses. This is the second level featuring Valentin.

You should boost 4 times before picking up the first body armour, then repeat for the full 12 boosts. Bounce boost or similar would allow for a large number of guard boosts, and still 12 self-boosts. The main low-damage boost will be the 4th one, so 3 boosts -> BA -> 5 boosts is still pretty sure to kill you.[1]

There are 4 NPC's in Streets that can spawn, 2 of them are chaser guards[2] and the other 2 are civilians[3] (I will not bother covering the civilians, but they work similarly to the guards). When you start up Streets and the cinemas begin to play, two 20 second timers are also started, one for each guard. After 20 seconds have passed, the timers are reset with a new value which is individually set for each guard. To easier keep track of things, let's call one of the guards RED and the other BLUE.

RED's timer will count to 5 seconds, and BLUE's to 9 seconds. Whenever the timers reach their values, the game checks if the guard can be spawned, and no matter the outcome, the timer is reset and starts over.

The first thing the game will check is if the guard is no longer in the level, i.e. has he been killed and faded away. For obvious reasons, the game doesn't want a new guard to spawn every 5 or 9 seconds. One of the most interesting discoveries I made though is that 2 guards with the same ID-numbers as the spawning guards already exists in the level from the start. So it's actually not until those guards have been killed that the corresponding guard will be able to spawn. Who are these 2 guards you ask?

BLUE is the guard who comes running towards Bond in the very beginning of the level, and RED is one of the guys by the tank. So if we kept these guards alive, no guards would ever spawn. So how come we see spawned guards on Agent? Well, the reason for it lies in BLUE's script. It's actually the same script used by both spawned guards and it basically says that if Bond is too far away from the guard, he should be eliminated (no fade, no death animation, he simply disappears). This elimination allows him to be respawned in a new location closer to Bond. This is the reason why you can never "outrun" the spawned guards.

Now, let's say we killed both guards and the timers reached their values, where will the guards spawn? As you might know, Goldeneye's levels is divided into "rooms", and where the guards will spawn depends on which room Bond is in. I made an image showing an overview of Streets and the different rooms, their room number and all spawn locations. 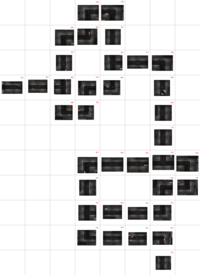 Below is a list of which room's spawn point RED and BLUE will use when Bond is in a certain room.

So if Bond is in room #37 when RED's timer reaches 5 seconds, RED will spawn at the red circle in room #41. I should also note that the purple circle in room #43 is purple because it is used by both guards.

Remember what i said about the guards being eliminated when Bond is too far away? An interesting fact is that some (most) sets of rooms are so far away from their corresponding spawn points that they don't lie entirely within the guards radius of non-elimination. So it's possible for a guard to spawn and immediately be eliminated due to being too far away from Bond. This is useful for DLTK.

Finally, when a guard spawns, his weapon and attributes are randomly set. Here's a list of the possibilities and their probabilities:

Each set of barricade guards have a 50/50 chance of being KF7s/Rockets or Rockets/KF7. [4]