Bunker 2 (Part ii of Mission 5: Servernaya) is the ninth level in Goldeneye 007. This was the only level that used the watch magnet attract until the discovery of the Cell Warp. 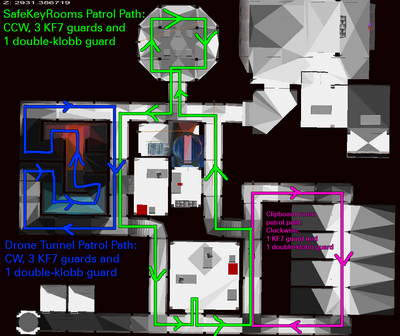 Each level is broken up into sets, which are usually large regions of a the map. These are not the same thing as 'rooms' - generally there are a lot more rooms. When a guard needs to plot any route, they first "zoom out" to the level of the sets. They look for a path visiting the least number of sets to get from their set to your set[2].

So on Bunker 2 here's the relevant part of the map broken up into sets: 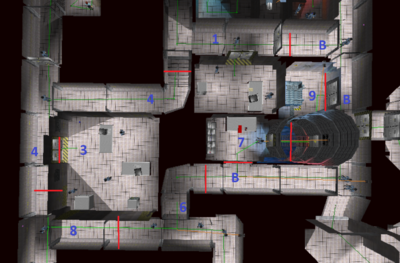 And here's the graph of those sets and how they are linked, which guards plot their routes through 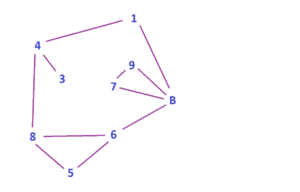 The basic idea of the current WR strategy is to avoid luring the 2nd safe key guard (in the safe room) while luring the clipboard guard[2].

Whereas if he makes it into 8, then we have to be all the way over in 1 to lure him back (not possible).

So the broad idea is:

It's also worth applying this to the clipboard guard.

This map that I've generated shows in pale red the circle that you can lure the clipboard guard from at max noise on console (19.85). If you lure him reasonably late (good) then it'll be beyond the purple line, which are the boundaries between set. This means you'll be in set 6 rather than 8, and the clipboard guard will go from 5 -> 8 i.e. through the camera-side door of that big room. 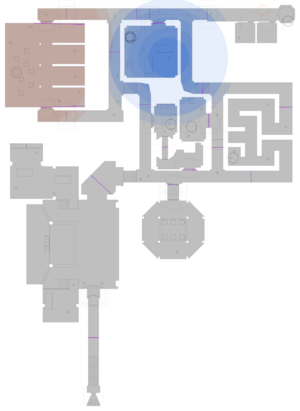 In blue are the hearing distance with 1-6 consecutive kf7 shots of noise in emu. All that's relevant is 3 is going to be too few to practically alert him, and 6 is plenty.

There are 10 patrolling guards[3].